I have very fond memories of New Zealand. While en route to Canada in 1971 I spent over a month hitch hiking around the islands enjoying the scenery and the incredible hospitality of the people. It was my first brush with real snow capped mountains and the New Zealand version of Bush Walking known locally as Tramping. I returned there several years later with my life partner and 12 month old son. This time, once again, about to head back to Canada. We really liked New Zealand and “the itch” to travel just wouldn’t go away. We ended up in Kimberley, B.C. for a few years and finally decided to take a year long sabbatical and New Zealand was the obvious destination. We both liked the place and there were opportunities for both of us to find gainful employment. It was an opportunity for my wife to get back into the work force as a Registered Nurse. We wandered around the North Island for a bit and settled in Whangerei for the best part of six to eight months. I played the house parent, read lots of books about the Islands,  while Mae (my wife) worked at the local hospital. The climate was great, the people and life style relaxing but still we had “the itch” . We decided to move around a bit while still searching for more adventure and another place to work. We headed down the North Island to finally end up is Gisborne on the East Cape. There I had a sort of revelation. Standing on the beach at Gisborne while looking east I realized that there was no significant land mass until you hit Chile in South America. Looking south there was no significant land mass until you reached the frozen landscape of Antarctica. Looking north, for all intents and purposes, there was nothing until you reached Asia. We were standing on the edge of the world. And it really felt like it. The sensation was almost over whelming. With the island at our back the great wide Pacific Ocean stretched North, South and East for thousands and thousands of  kilometers’. I found 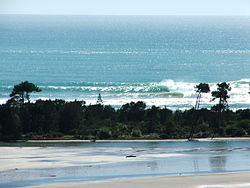 that intimidating. Somewhat humbled by the experience we head back into more populous region of the island. We decided that Rotorua and the Bay of Plenty area possibly offered the best chances for employment and, that may have been true, but the catch in the scheme was trying to find a place to live. We could not find a place to put down even temporarily while looking for employment. Staying in hotels was not an option. Despite the attractions of this heartland of Maori culture we decided that with only a few months of the sabbatical left we should head off and visit relatives in Australia. With some reluctance that is what we did.

New Zealand must be one of the few places in the new world where the indigenous people and culture have left an acknowledged  mark on the white man. Over the two centuries of contact the white inhabitants of New Zealand have been enriched with an infusion of Maori culture. So when I recently stumbled on the following YouTube videos of the Maori Haka it all came flooding back.The kids singing mass in Maori; the Polynesian rhythms that infuses jazz bands that play in the pubs; The incredible musicality of the Maori; The young Maori with tribal tattoos; It was like I was still there.  When I watch these videos and I immediately get choked up almost to point of tears.

For those that are unaware ….. “The haka is a ceremonial dance or challenge in Maori culture. It is a posture dance performed by a group, with vigorous movements and stamping of the feet with rhythmically shouted accompaniment. Although commonly associated with the traditional battle preparations of male warriors, the Haka have been performed by both men and women, and several varieties of the dance fulfill social functions within Māori culture. Haka are performed to welcome distinguished guests, or to acknowledge great achievements, occasions or funerals.

New Zealand sports teams’ practice of performing a haka before their international matches has made the Haka more widely known around the world. This tradition began with the 1888-89 New Zealand Native Football Team tour and has been carried on by the New Zealand Rugby Union Team (“All Blacks”) since 1905.” …. Wikipedia.

I offer them to you for your enjoyment………

The Islands of New Zealand are at the end of the earth but still well worth an extended visit. If this has whetted your appetite for New Zealand I suggest the Film Once Were Warriors. It is a wonderful movie, a  little dark perhaps, but well worth finding and watching.

post script: The power of the Haka after the Christchurch massacre