Specifications and Description: The Continuum Fingerboard or Haken Continuum is a music performance controller and synesizer developed by Lippold Haken, a professor of Electrical and Computer Engineering at the University of Illinois, and sold by Haken Audio, located in Champaign Illinois.This a a modern electronic instrument initially developed between 1983 and 1998. It features a touch-sensitive neoprene playing surface measuring approximately 19 centimetres (7.5 in) high by either 137 centimetres (54 in) long for a full-size instrument, or 72 centimetres (28 in) long for a half-size instrument. The surface allows a pitch range of 9350 cents (about 7.79 octaves) for the full-size instrument, and 4610 cents (about 3.84 octaves) for the half-size instrument. The instrument has a response time of 0.33 ms. was initially developed from 1983 to 1998 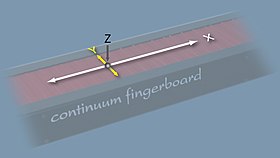 Sensors under the playing surface respond to finger position and pressure in three dimensions and provide pitch resolution of one-tenth cent along the length of the scale (the X dimension), allowing essentially continuous pitch control for portamento effects and notes that are not in the chromatic scale, and allowing for the application of vibrato or pitch bend to a note. A software “rounding” feature enables pitch to be quantized to the notes of a traditional equal-tempered scale, just scale or other scale to facilitate in-tune performance, with the amount and duration of the “rounding” controllable in real time.

I became aware of the instrument when I stumbled on the following YouTube video of the Berklee Indian Ensemble. To my ear the sound is very much like the traditional Indian Veena and I can see (hear) that its use in traditional Traditional North Indian Classical music would not require much of a leap.

Over the last twenty years the instrument has found a place with  a  number of contemporary composers and is featured in a significant number of film and TV scores (including Indiana Jones and the Kingdom of the Crystal Skull).

They are pretty pricey so don’t go looking for one in your local music store.