“Barbarian Days is William Finnegan’s memoir of an obsession, a complex enchantment. Surfing only looks like a sport. To initiates, it is something else: a beautiful addiction, a demanding course of study, a morally dangerous pastime, a way of life.
Raised in California and Hawaii, Finnegan started surfing as a child. He has chased waves all over the world, wandering for years through the South Pacific, Australia, Asia, Africa. A bookish boy, and then an excessively adventurous young man, he went on to become a distinguished writer and war reporter. Barbarian Days takes us deep into unfamiliar worlds, some of them right under our noses—off the coasts of New York and San Francisco. It immerses the reader in the edgy camaraderie of close male friendships forged in challenging waves.

Finnegan shares stories of life in a whites-only gang in a tough school in Honolulu. He shows us a world turned upside down for kids and adults alike by the social upheavals of the 1960s. He details the intricacies of famous waves and his own apprenticeships to them. Youthful folly—he drops LSD while riding huge Honolua Bay, on Maui—is served up with rueful humor. As Finnegan’s travels take him ever farther afield, he discovers the picturesque simplicity of a Samoan fishing village, dissects the sexual politics of Tongan interactions with Americans and Japanese, and navigates the Indonesian black market while nearly succumbing to malaria. Throughout, he surfs, carrying readers with him on rides of harrowing, unprecedented lucidity.

Barbarian Days is an old-school adventure story, an intellectual autobiography, a social history, a literary road movie, and an extraordinary exploration of the gradual mastering of an exacting, little-understood art.” ……….. Amazon Books.

In reading this book I recall my early years in Australia. This book is a reminder of the golden years of surfing that was such a significant part of my youth. Australia has the reputation of being the driest continent on the planet and at 59,736 km it also has the sixth longest coastline in the world. While the country’s cultural mythology is dominated by “the Outback” the ocean is the country’s playground.  Like most youth living within reach of the Australian coast I grew up in and around the ocean. In my early teen years I learnt to body surf while on summer vacations with my family at East’s Beach just south of Sydney. In my later teen years I started surf board riding at Freshwater Beach in Sydney. That beach is the spiritual home of surf board riding in Australia. When the Hawaiian surfer Duke Kahanamoku visited Australia in December 24, 1914 he gave an exhibition of surf board riding at Freshwater Beach. That was a hell of a Christmas present for Australia.The board that Duke Kahanamoku used for the demonstration was built from a piece of pine purchased from a local hardware store. In my early surfing days at Freshwater Beach the local lads from time to time would haul this massive eight foot / sixty pound surfboard out of storage and try to surf on it. At the time I don’t recall any of the local surfers being all that successful but it did put us in touch with a real slice of history.  Over the years the true value of this surfing artifact was recognized and is now under glass in the Freshwater surf club. There is also a statue of Duke Kahanamoku on the Northern headland over looking the beach. 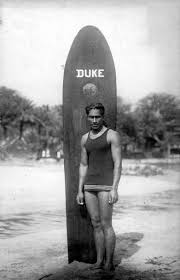 From that time on Australian surfing developed independently from the Hawaiian and Californian influences. That started to change in the 1950s and 1960s when the latest innovations in design and techniques once again reached Australia.

I was part of the generation that was susceptible to the new innovations. My surfboards at the time reflected the early days of this new era. At over nine feet long with a single fin my boards are large compared to the under 7 foot multiple finned “Thrusters” of today.

My surfing life largely coincided with the beginning and end of the 1960s. When I emigrated to Canada my surfing years were behind me and mountain life styles came to dominate my recreational endeavors. From time to time the latest surfing magazines would show  up in the local book shops and images of sun light on water would still fill my mind and tickle my consciousness. Like the author of the book postulates, Surfing is an addiction that you never truly leave behind. The book, with it’s stroll down the author’s  surfing years, refreshed my memories of many great days, great waves and youthful camaraderie. Admittedly my adventures probably were not of the same magnitude of magnificence as the author’s but while reading the book it was still good to wander through the lands of “what if”, rediscover old stories, old locations and new countries with bigger, better and sometimes scarier surf spots.

Enough about me and more about the book. When we talk about “sport” we are usually talking about team sports with all the hype and hoopla associated with the entertainment industry.  So in that sense surfing is not a sport. It is a recreational activity. It has more in common with Skiing, Mountaineering, Kayaking, Canoeing, Hangliding and Rock Climbing than any of the sports we are likely to see on TV. The book is a memoir of William Finnegan’s involvement with surfing and the addictive nature of the activity.  For any one who has had even a passing interest in surfing this is a must read book. For others it is a look at “coming of age” experiences and youthful, and not so youthful adventures around the world. There is a distinct lack of jargon and hype that makes it possible for the average reader to get a real feel for the activity known as surfing. For those of us who have lived through any of the surfing eras of the past forty plus years, either as a participant or voyeur, it is a very pleasant reminder of the things we may still miss from those bygone days.